There is nothing my newfound mommy powers can’t fix… 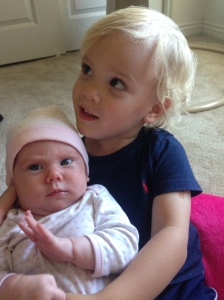 I have to take my poor baby to the doctor with her tongue sore. It has raggedy edges and there is pus. It affects her eating and I know I wouldn’t take her in had it not been for previously bad (very bad) experiences relating to her mouth. Her pediatrician refers us to a specialist which does exactly the opposite from calming my nerves.

Luckily the nanny can take my oldest little monkey while princess and I head for the hospital. I feel like I should have my own parking spot here by now. I’ve also gotten good at finding my way. Maneuvering the stroller with the car seat adapter and car seat and of course baby and overflowing diaper bag, nursing cover and bottle she won’t drink anyways, we are only slightly late.

The doctor is one of those warm grandpa types (he even has blown up framed pictures of himself with two little adorable twin boys on his lap at his office). He is gentle yet efficient and actually does manage to calm my fears even if he is suggesting that a blood disorder is the most “logical” explanation. I really don’t want to even think about that being an option, still hoping for the freaky coincidence of everything just lining up wrong causing the excessive bleeding. He tells us that my daughter has had so much trauma to her little mouth there is no wonder blisters start popping up. He says that he can have my little one’s doctor prescribe some gel for the swelling and pain or even antibiotics for the infection but that it should heal on its own. I point out that it has been there for multiple weeks and has gotten worse and worse. He again points to the mouth trauma of both the cuts and the surgery saying she has healed remarkably well for all that she has been through. I must say I feel like the proud parent when he adds what a strong little girl I have!

Once the sore underneath the tongue has gotten better and the feeding has improved I have the most brilliant idea of taking both my kids to the mall ALONE (yes, you heard me). It actually goes okay with my big guy being extra well behaved and reasonable (what is an extra chocolate chip cookie after all; hashtag “pick your battles”). The baby is of course, as always, sweet as can be unless she has to eat (which still is quite often) but conveniently there are “mother’s lounges” everywhere where you can nurse in private while your older kid is playing. Not minding the occasional kids under 5 “boob viewers” (that curtain is sure fun opening!) I relax as this breastfeeding thing is going better and better. I’m so proud of us!

I plop my son down on an oversized pillow on the floor by the nursing chair, letting him watch “Curious George” (which he can say in both languages!) and feel invincible. Bring it on people! I am super woman! With some real life super powers! I even get to shop a bit in between feedings (cookies and breast milk respectively, struggling to get a bite in myself) and score some items which don’t resemble yoga pants and comfy “built in bra” tops too closely.

I’m on top of the world until we reach the car. I’m not talking about the searching for the keys forever with two screaming kids as it gets dark outside or even the buckling my son while my daughter, who hangs comfortably in her baby carrier around my waist I might add, wails like she is being murdered slowly. Nop! Nor do I mean the struggle of getting the car seat off of the car seat adapter (oh that is an entire different story) or swearing at my absent husband who obviously can’t hear me (he is working so hard for us and this was entirely my idea after all). I have successfully put my screaming son in the car all buckled and ready (no more Mr. Nice & well behaved guy however, oh the looks!) and taken off his stroller seat as well as baby’s car seat. I work up a sweat putting the car seat in its base in the backseat while my heavy baby is still bouncing and crying in the carrier basically killing my back and it’s neither of these things that are breaking me down and making me lose my “mommy powers”, it’s the freaking transfer.

So when I’m about to transfer my wailing little angel into her car seat, I realize something is off. No matter how much I try, I can’t buckle her in. The straps are stuck and mustering all the strength I have left doesn’t even help me. Since I’m juggling  a screaming baby (with the unsnapped baby carrier still around my waist) with one arm and trying to pull the straps free with my other one I don’t have enough strength -or hands to loosen those dang straps! Crying surprisingly doesn’t help either (or swearing or joining my kids’ wailing). Time for plan B. Except I have no idea where to put my four months old. I can’t put her on the floor of the car or on the seat, she might roll off. I need my hands though. I strap her into the carrier again to free my hands up to work on the straps to no avail. What the H happened??

The most logical reason to the stuck straps is now snoring in his big boy car seat (after having smeared the sandwich from subway he refused to eat all over the back of the driver’s seat). Nice! Another place I can’t momentarily put my little baby! And forget about my son’s stroller seat, it’s so flimsy without proper straps for a baby- she would fall right out. I’m careful while folding out big “Uppa” stroller in the car as not to accidentally hurt baby in the baby carrier strapped to my body. I bring baby to the front seat and let her nurse to regroup and think. Stupid car seat! I can’t believe my son somehow got the straps stuck and I can’t believe my mommy powers ran out and that I can’t fix this.

Baby girl approves of this scenario, snuggling in the warm front seat, sheltered on mommy’s lap away from the darkness outside and loneliness of her car seat. She is hungrily nursing even if I just feed her before we headed to the car. I’m am too exhausted to come up with a plan or to try again.

Both kiddos are now sound sleep. I’m debating defeat. Stalling, I call a good friend who complains about her baby crying while her older son misbehaves as she is trying to cook for her husband not yet home from work. As I explain my situation though she declares me a winner. I know she can’t come help me right now but I know who can. It’s late, we are sitting in a now deserted, dark parking lot. I can’t take my young ones home. I feel like all my mommy powers are leaving my body as I pick up my now strangely heavy phone to dial a different familiar number…”hunny, eh, it’s me” 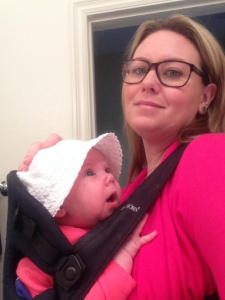 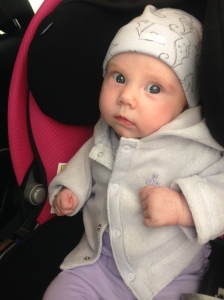 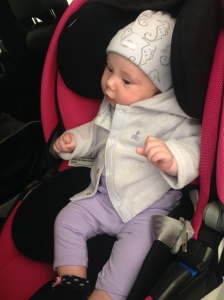